A degree from the Culinary Institute of America and a move to Kansas City, Missouri, made for the perfect recipe for Rob Magee’s barbecue success. Years ago Rob formed a competition team while still working as a hotel Executive Chef. With the team’s 10 years of success in the highest level of contests nationwide and Rob’s aspirations of owning his own restaurant, his dream became a reality when he and his wife Kelly opened Q39 in 2014.

Q39 is a rustic and contemporary concept featuring an open kitchen design visible from the dining area. The menu includes various hickory smoked and oak grilled selections inspired by competition style cooking. You won’t find a microwave in Rob’s kitchen as all of the offerings are always fresh and made from scratch.

With the immense success of Q39 in the first two years, expansions are underway and a second location is set to open in 2017. Rob’s passion for excellent barbecue and culinary creativity has made him a champion in the barbecue capital. 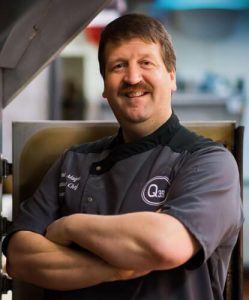 How did your Southern Pride experience begin?  I was ready to open my restaurant and knew I needed to practice first. I knew a lot about Southern Pride and that they had the edge over everybody else both in quality and durability. I purchased a SPX-300 and put it on a trailer. I practiced on that 300 in my driveway for six months straight to make sure I cooked it perfectly. When the restaurant opened we started using two SPK-500s and my barbecue was pretty flawless from that day on. Since then we’ve added two more 500s, including one for on-site catering.

What do you really like about Southern Pride equipment?  Southern Pride is one of the best smokers out there. They’re consistent, reliable and very little maintenance. Anything that burns wood and not pellets really gets the authentic flavor and smoke ring. The quality of the meat that comes out of a Southern Pride is phenomenal. The temperature is very consistent and the recovery time to get back to temperature after loading is very quick. It’s been a great experience to have Southern Pride.

How do you maintain your pits?  At the end of the night before we put anything in for the next day, I can tell you the stainless steel looks like they are brand new. We don’t believe you should leave the smokers dirty; a dirty smoker is old food. Every day we drain the grease from the grease valve, spray it with a kitchen cleaner, let it warm up for about 10 minutes, spray it with a hose and release the grease valve again so it cleans that out as well. That gets them right back to new.

How was your experience with your Distributor?  Mark is great and he stands behind the product. If there’s an issue, he drops what he’s doing and takes care of his customers. That’s why we have three more smokers coming. That level of service and standing behind the product is really important.