Shawn Moss of Culpeper, Virginia, was born with the passion of cooking. His mother started a catering company in 1980 and he assisted with the family business.

Shawn purchased his first Southern Pride smoker in 2001 and completed culinary school at Stratford University. After many years in the catering world he opened his first restaurant, Shawn’s Smokehouse, in March of 2013 in Culpeper, Virginia. With great success, he opened a second location in November of 2015 in Warrenton, Virginia.

With a total of 6 Southern Pride smokers and numerous awards to back the claim, Shawn’s Smokehouse is an American barbecue success story. 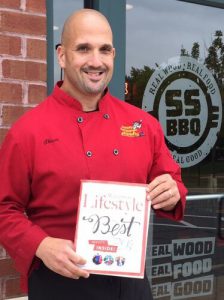 How did you learn about Southern Pride equipment?  It was a simple search on the internet. I had compared Southern Pride to a couple other smokers and decided to go with the SC-600. At that time I called the distributor.

What is the biggest benefit of having multiple SP smokers?  When you’re smoking different products at the same time, it’s beneficial to have two smokers. It’s also an advantage for maintenance purposes to have the ability to continue to cook while the other is being cleaned.

We noticed you have two SRG-400s and two SPK-500s. What do you like about those particular models?  We use the 400 for our chicken, to smoke our baked beans and to hold our ribs before serving. We primarily use our MLR-850 and SPK-500s for pork, brisket and ribs.

Maintenance and cleaning are always the worst part of commercial kitchen equipment but also the most vital to ensure proper functionality.  How do you maintain your pits?  It’s a necessity.  Even though your smokers are constantly running, you have to find time to clean them. We give the racks a thorough cleaning, as well as the inside, usually once a week. A friend that has a Southern Pride SPX-300 told me he had never cleaned his fan blade and he had had it over a year! I told him to make sure he cleaned that fan once a week; otherwise, you’ll burn up your motor.

The two things that separate us from others is the quality of our equipment and the network of Distributors that sell and support Southern Pride smokers. How was your experience with your Distributor?  I can’t say anything but good stuff about Tom. He just loves what he does. He’s been good to me, he’s worked with me and he’s a great asset to Southern Pride.