The Olson’s became interested in barbecue competitions when they stumbled upon a competition on television. Soon they were competing in 23 competitions a year and raking in the prizes to prove their product. They started smoking with the MLR-150 competition

level smoker in 2012, and Tim said they have already accumulated seven times more prize money than in previous years. 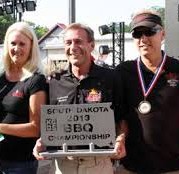 How did you get involved in barbecuing?  My wife and I watched a competition on television.  We have long winters up here, so there’s a lot of time to read and research.  We thought, “That sounds fun.”  I started cooking in the backyard and for neighbors, and it evolved from there.

When did you start using the MLR-150?  We got it in 2012.  When we started doing competitions, we kept thinking, “This meat is not as good as the restaurant,” so we went to Southern Pride.  It is what Southern Pride is all about – it’s their machine and it’s what they’ve done for years.

Why are Southern Pride smokers better than the others?  This is my fifth smoker in four years, but this is the smoker I’ve wanted from day one.  When we go to a contest, we know we can win now because we know it will perform exactly the way it did the weekend before.  The consistency is remarkable.

How did the MLR-150 affect your competition experience?  We don’t have to babysit our smoker.  Everyone else gets up in the middle of the night to prepare for Saturday’s competition.  I can sleep in, start in the morning and have it ready by noon.  I think it will become a very popular smoker in competitions when people understand the advantages of it.

What is your most prizes competition win?  We are most proud of the success we had in Mancadle, Minnesota, at the Bend of the River Cookout in June of 2013.  We won Grand Champion and just kicked butt in everything.